This event was celebrating its 10th year and it is a Circular 105 mile run around the Lake District trails from Coniston, taking in 6300m of ascent.

I am not new to the world of Ultra running; in fact, this is about my 15th Ultra since the age of 12. I drove up in the Tri-Adventure van a day before this event, not knowing whom I would bump into. It was great to be back in the Lakes with the fresh smell of mountain air.  The Event HQ was a couple of large marquees in a school’s grounds, making it a great hub for the runners, and it even had a chill out area with sofas and coffee. I collected my entry pack in the afternoon before the event started at 6pm, which is unusual for an Ultra to start off so late into an evening.  The Lakeland 100 also has a 50 mile event which starts the following morning from the 69 mile point of the Lakeland 100. The forecast was for a bit of rain, and after a wet week, the course was already pretty muddy.

I was quite excited ahead of the run, and a welcome surprise for me was to see an old Adventure Racing friend Sabrina Verjee at the Race Briefing. On the start line, I had not allowed myself to compute the task ahead.  I was simply going to keep running and enjoy my time in the Lakes. 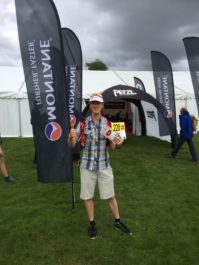 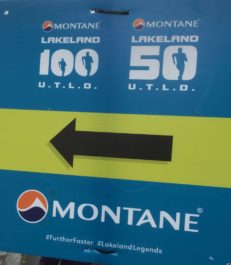 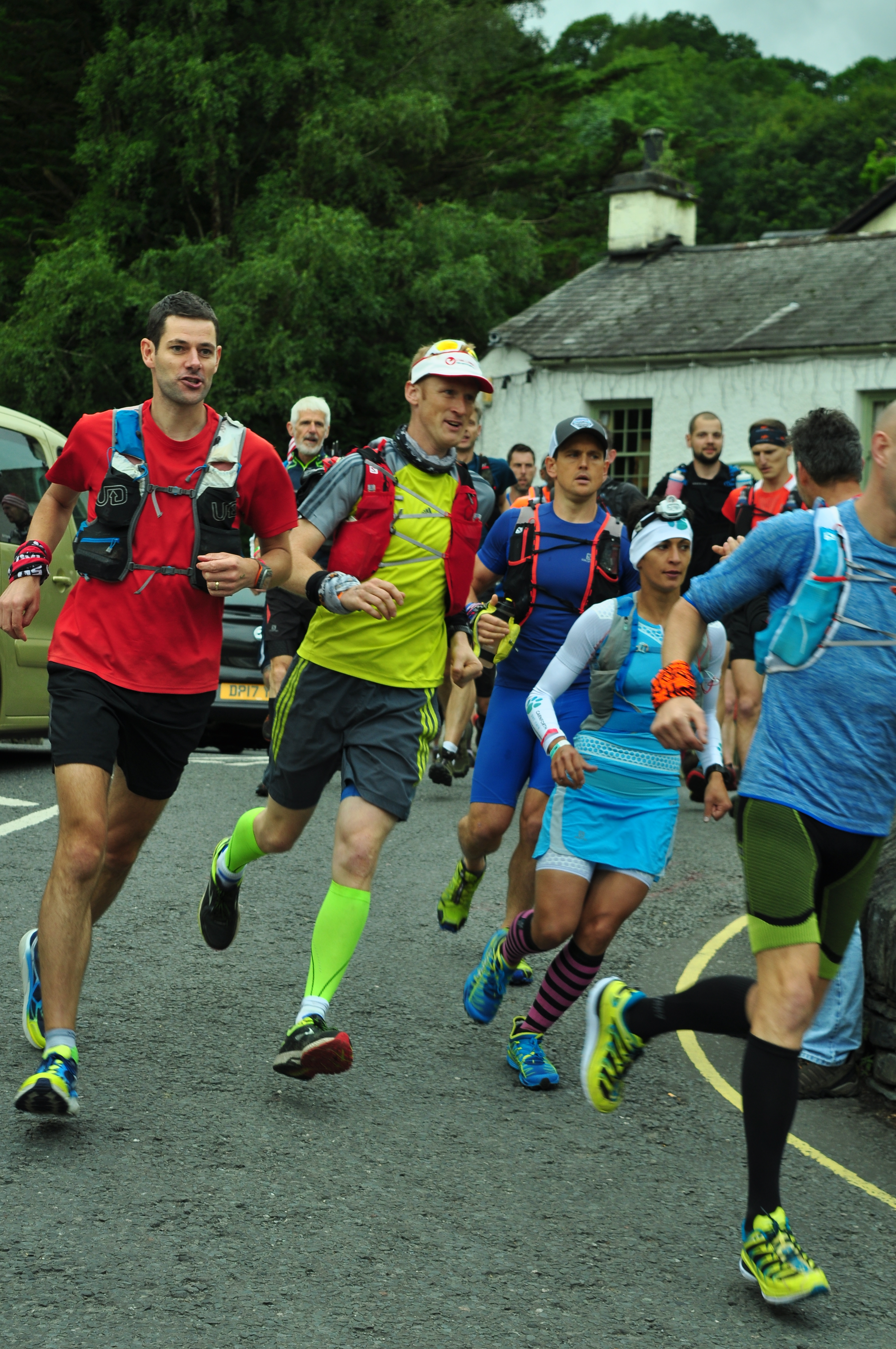 Setting off with Sabrina

I had not intended to set off quite as fast as I did.  My plan was to cover as much ground in the 4 hours of daylight we had, before then slowing up during this first phase in the dark. There was a great turnout of supporters to see us off in Coniston, and then we were off up into a drizzly fell. The navigation was straightforward from the off, and with other fast starters around me, I found myself hitting CP1 in 2nd place and feeling quite good. By now, the field was spread out, and I was entering into unfamiliar territory, requiring navigation with the maps that were provided. I did have the route .gpx on my watch as a back up but this wasn’t sufficient to navigate off.  Soon, the guys behind who were more familiar with the route caught up, after I had to keep checking the map after making some slight errors.  I wasn’t able to stick with this group who, I guess, had recced the route and could just plough on.  I’d got as far as Wasdale before the night started to draw in, I found myself still in the top 10, but as it got dark, i started falling back in the field with head torches passing me. I wasn’t feeling too good either and struggling to keep down fluids. I put this down to a codeine pain killer I took before the event which played around with my stomach. I am not sure why I took it and this was one of my biggest regrets. It was a long night and I was struggling to maintain any focus. I felt powerless on the hills and it was wet and cold. I longed for a break.  By the time I reached Braithwaite, I was ready for a nap.  Having eaten some cooked pasta and rice pudding, I put my head down on the table and slept for 20 mins. I came round to quite a busy CP as many had caught me up.  I set out for the next leg to Blencathra but was still not feeling on good form. I don’t think the sleep was enough, so at the next CP I had another 15 minutes, by which time it was getting light and I really felt the beneficial effects of Solar power.  I was among people going at a much more steady pace and one I could maintain.  I cracked on along the Coach Road, a long uninspiring track.  I was starting to feel much better and got my act together.  Some hot soup at the next CP saw me back on form having slipped back to 112th position, and I was able to start to claw back places. At one point, I caught up with a group who were moving at a steady rate, and, as I passed, one of the runners decided to joined me.  It was handy as this is someone who had been on the recce hikes and was familiar with the route to Dalemaine, the 59 mile point and theoretical half way.  We arrived here at 10am, 16 hours in. 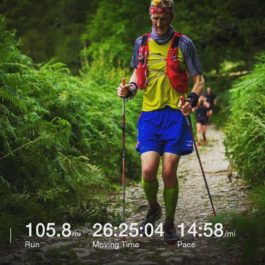 I was now feeling great and was pleased to be ahead of the 50 milers starting at 11:30. I wasn’t keen to stop too long here, so I picked up my watch battery charger and some supplies for the next leg and headed off alone towards Pooley Bridge, and again into the drizzly and windy fell.  Waterproofs were essential to maintain any of my body heat.  After the initial hike up, there was a long down hill stretch which was fab and took us down out of the wind.  I was catching other runners ahead, which lifted my spirits. There was another guy I then found myself running with, which again was ideal for a testing navigation part over a fell to Haweswater. I was grateful for the company, and we stuck together right up to the next checkpoint.  By this stage, the faster 50 mile runners were coming through and gave passing comments of support. This was great, and I found myself full of beans by the next checkpoint, which I again sailed through, after having stocked up on supplies and taken in some hot soup.  Over the steep pass, I was motivated by latching onto the 50 milers, which resulted in me catching up with my fellow 100 milers. After the pass, I saw a nice long descent down Longsleddale and I was all go. The weather was drying up and it felt like the back of the course was broken.  I had actually calculated that it was just a marathon to go! 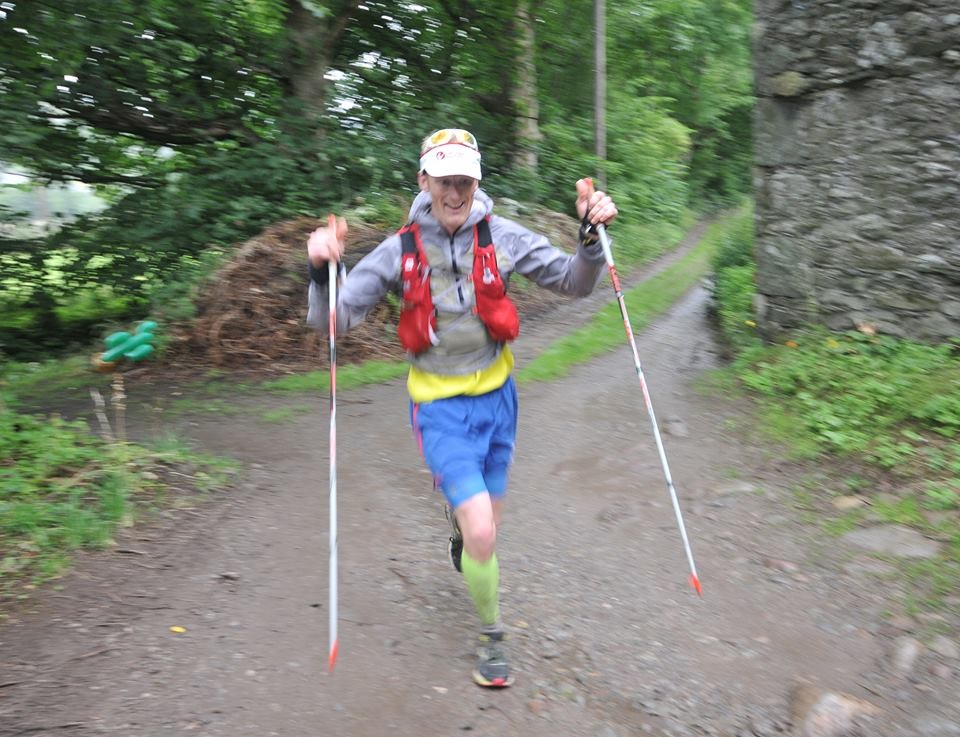 I kept the momentum going through Kentmere CP, and I had a nice surprise seeing an old friend, Carrie, who had come out to run with me into Ambleside.  It was like a breath of fresh air and helped take my mind off the running.  I also bumped into Paul Noble, another Adventure friend, who took a picture and with whom I shared a few words as I came down Garburn Pass. 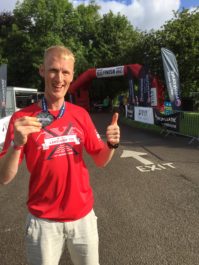 Carrie left me in Ambleside to finish the job off.  I was among some quick 50 milers who really were getting the best out of me.  They may have dome 55 miles less by this point, but I was determined to keep up with them. I picked up the pace along the easier running Langdale stint, saying to myself that every step was a step closer, and the more effort I put in now, the easier the pressure will be later on. I was counting off the places i was making up, as I passed broken people with their Lakeland 100 yellow numbers on their backs.  I was flying, probably from the sleeping in the first half of the race. I could not be sure what place I was in, but I kept pushing to get the most out of myself.  The last CP was to go up and out of Tibblethwaite Quarry, up some steps called Stairway to Heaven. Again, after a brief stop, I found myself in a train of 50 mile runners who helped guide me through the second spell of darkness, back to Coniston and the amazing downhill finish. I was over the line 10 minutes before last orders, which was a great feeling. There was sheer relief at making the finish in 50th place, and in a time of 28h51m14s, and I looked forward to putting my feet up.  It had been tough. 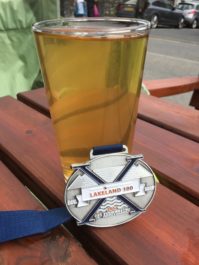 The dibber print out indicated that I had made the top 50 out of a field of 400 in a time of 28h51m. That meant that i had made up 62 places in the second half of the race. Any time under 30 hours on this course is considered very respectable, with only the top 12 managing under 25 hours. Sabrina managed to finish in 6th position overall and first lady home with a time well under 24h.

In summary, I was very pleased with my achievement as I had not put a lot of prep into this event. The course was technically tough under foot on the Lakeland Trails, and a real test of will power and maintenance of focus.  I am strong minded with a determination to keep going. It turned out that my second half of the race was in fact quicker than the first, much to my surprise.

Link to my Strava Route
Link to Website: Lakeland 100
Link to Results: Results 2017 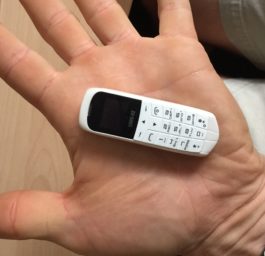