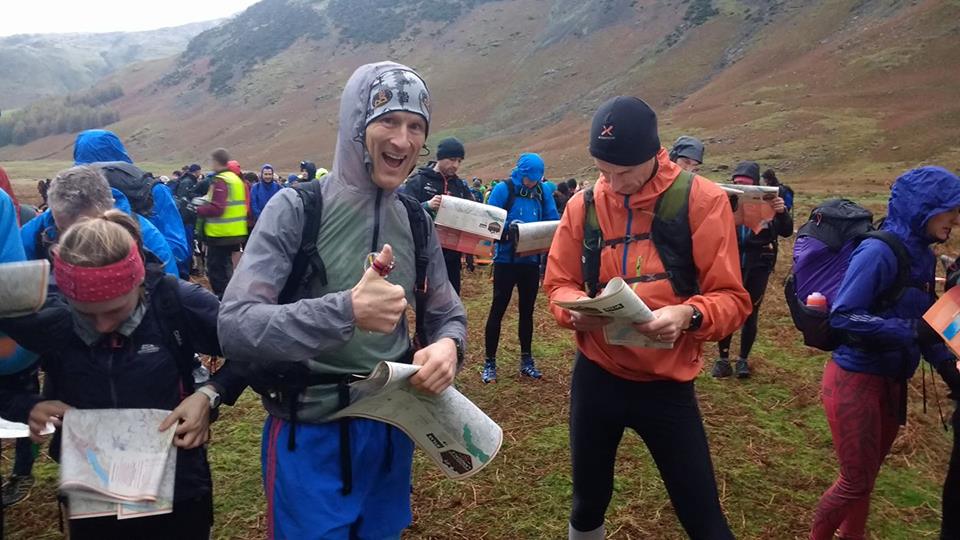 The end of October is often associated with Halloween and when the clocks go back… for a hardy few, it marks the annual staging of the OMM Mountain Marathon, a notorious two day team navigation challenge in a mountainous environment in often tough and challenging conditions. Competitors are completely self sufficient, carrying everything on their backs. This was a special bumper year and attracted a strong field as OMM was celebrating its 50th edition of this event by returning to the Langdales in the Lake District.

The first challenge is to find someone willing enough to team up with; someone who is of equal standard, and used to the harsh environment and terrain, so that you can work together and efficiently navigate through the course. There are 2 types of events at the OMM, which attracts 2000 competitors. A short, medium and long Score event, where competitors have to maximise points from the checkpoints visited within a set time, and those with the highest points are the winners (a bit like our Tri-Adventure events). Then there are the Linear courses increasing in the degree  of difficulty – C, B, A, and Elite. These see competitors visiting the Checkpoints in a set order with the quickest being the winner.

I was keen to tackle the OMM Elite course again, as I believed the potential was there for me to achieve a top 10 place, having been placed 14th with Kev Honeysett a decade ago, at the 40th OMM. This time, I paired up with a long standing mate from my Adventure Racing days, Dave Spence.  I was pleased with this pairing as I had raced with Dave before about 8 years ago and it had worked very well then.  Dave is also based up in the Lakes, which made it easy to convince him to get involved with another OMM.  I caught the train up from London during the day on the Friday to go through final prep and get registered ahead of our start window early on the Saturday morning. We stayed in the van at the venue the night before the event.

Saturday morning, we were greeted with strong northerly polar winds and low level cloud, making for some claggy hills, with some rain  thrown in there as well for good measure. Most would say typical OMM weather, with low visibility and definitely one for the navigators. Those who are fast Mountain Runners, or those who struggle with navigation would prefer clearer and brighter conditions. 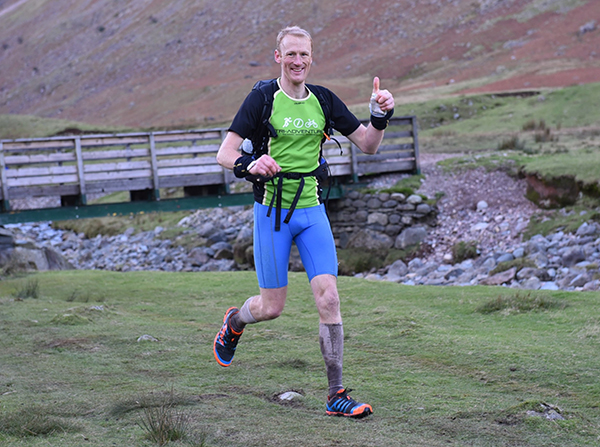 At 08:30 we were off on our Elite Adventure and, in true OMM form, we were sent straight up a steep hill to the first of 14 checkpoints. We soon settled into our rhythm and pretty much maintained that during the course of the day. There were faster teams around us, but we kept bumping into them as they made navigation errors in the conditions. We carefully navigated ourselves through the course. The only pressure was to make it to the overnight camp by the 20:00 cut-off. There were some challenging features to find where the checkpoints had been placed which took all of our navigation skills to locate. As we neared the end of the course, it became clear that we would not make it to camp before dark.  I think all competitors in the Elite Course had a tough day with many throwing the towel in, knowing they could not make the cut-offs in these conditions.  Even the leaders were 2 hours slower than an average OMM day 1. The course planners had really set a high mark which saw 78% of Elite teams, and 90% of A class, not complete day 1. I put this down to the constant ascent and descent everyone had to endure to cover the distance over some very tough uneven Lake District terrain. We were, however, still in it and arrived at camp an hour after dark having spent 10h36m on the hill.  Much to our surprise, and thanks to our efforts, we found that we were in 9th position out of 10 finishers!

The course was still open for another 20 minutes, during which time another team, who started behind us, could have bumped us down, but we couldn’t wait around as we had camp to set up in a cold boggy field.  We put up our small Terra Nova Photon tent, which would protect us from the elements overnight and allow us to dry out, change into our spare kit and cook a hot meal before sleeping and resting. With mountain marathons, weight is a key part of a team’s efficiency, so, lightweight balloon beds are used to insulate ourselves from the ground (see the youtube link below), and 1 season sleeping bags are used, offering marginal insulation from the cold air. The OMM is never sold as the most comfortable night’s sleep on a Mountain Marathon, but I did actually sleep straight through to the Camp Alarm call at 6am the next morning, bearing in mind that the clocks went back during the night, giving us that very welcome extra hour.

Day 2 was a complete contrast to the conditions experienced on Saturday.  Sunny blue skies greeted us, which was a great relief, as it allowed for faster movement over the dryer ground than the day before.  A new map was handed out at the start, with a course plotted to take us through 10 CPs, one of which was the Charnley Crag Cairn, a memorial cairn to Gerry Charnley, the original founder of the Mountain Marathon. We found ourselves still in 9th position out of the 10 remaining teams and, with the better conditions, we could see the other teams around us, which was uplifting, as we jostled for position and route choice throughout the day. The time pressure had not eased though, as there was a tight 16:00 course closure in place, which kept us pushing right to the end. It was a bitter cold day, the type where your fingers stop working. This made it difficult to get into the zips to get at the food on the go. We knew, however, that if we could finish day 2 before the cut-off, we would have earned a well deserved top 10 spot!  We arrived at the finish drained and exhausted after another long 7h51m on the hill, to finish with 30 mins to spare.  The picture below was taken just after we had crossed the finish line and just before we had found out that we had gained a place to finish in an astonishing 8th position in the Elite field. 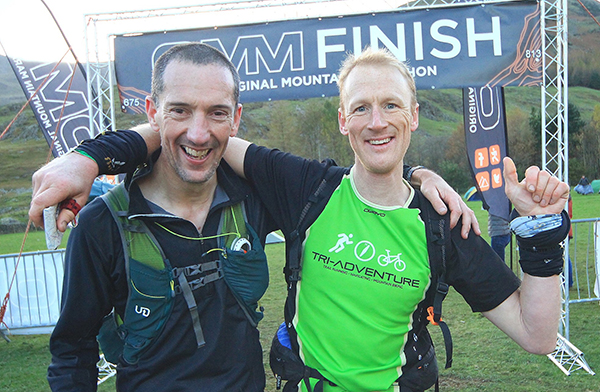 Dave and I worked really well as a team. It is an important quality to have a partner who is able to look after themselves in the tough conditions. This includes a sound clothing layering system and staying fed and watered.  There was plenty of drinking out of streams en route to minimize the weight carried on our backs. Also, the ability for us to both navigate at a high level in the clag allowed for discussion on route choice and each of us able to keep tabs on where we were. It was a pleasure to race with Dave in, what I believe, to be my best result to date. 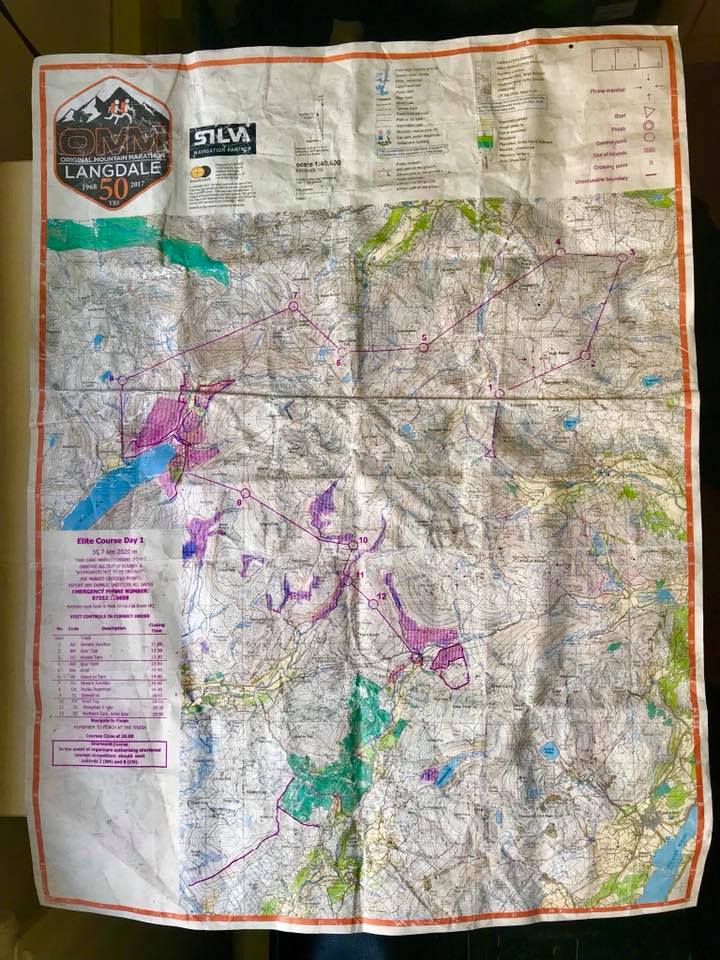 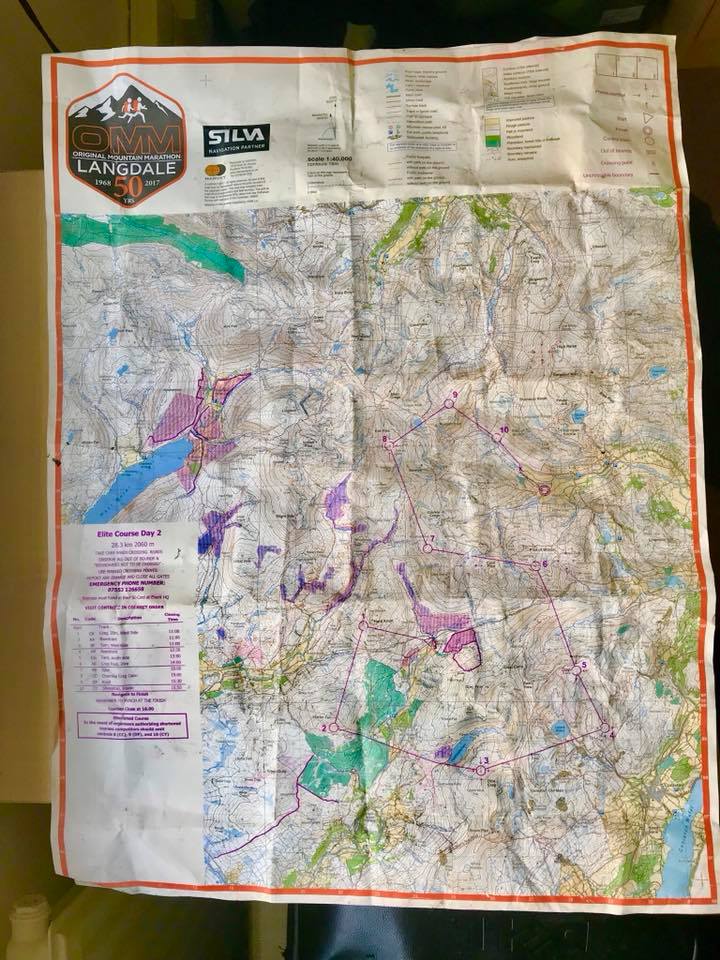 There was a lot of discussion on various platforms afterwards about whether the 50th OMM Linear courses (Elite,A,B,C) had been set beyond most people’s abilities. There are bad weather options available to the the organisers to adopt, if necessary, but these were not implemented.

In my opinion – The OMM has a reputation for being extremely tough, set at the end of October in mountainous environments. We know what we are letting ourselves in for. As strong navigators, and perhaps not the fastest of mountain goats, clag and low visibility is our dream ticket. Yes, the course was tough this year and noticeably longer over tough terrain, made worse by the weather we encountered.  But this suited only a small handful of competitors who rose to the challenge. Some teams perhaps stepped up a class for this 50th edition or returned after some absence and found it really tough going to then reach the camp within the time cut-off. Not forgetting, OMM is a business and in this social media world, I am sure they would have liked to have seen more happy completers who will be back for more, rather than the large proportion of DNF’s in their linear courses. I hope they don’t make the courses easier in future years to improve the ratios. Given the conditions at hand, a choice of a shorter linear course option, at the start line may have tempted many to go for a safer option to complete the OMM. Those who were psyched up to take on the full course could go and battle it out.  I am sure I will be back for more as I love these type of events. 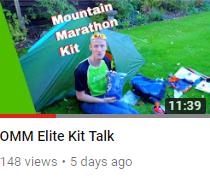 Kit support from Alton Sports as a Running Ambassador

This entry was posted in General, Race Reports, Uncategorized. Bookmark the permalink.