With this final event of the winter series, myself & my tri adventure partner – Nige were ready to tackle the muddy & windy conditions which the beautiful surrey hills were throwing at us.

The winter series had started off in Peaslake, where we had a terrible event, navigation was shocking, we bypassed a checkpoint on at least 3 occasions (partly due to looking for a fence post as it was written down, when it was actually on a tree!!) on the run leg & the bike leg proved to be even worse!  On a positive we had a blast on the bikes, getting caked in mud & exploring the woodland surroundings & with cake & tea on offer at the finish what’s not to love?

The second event started in Effingham & proved to be a huge turning point in regards to both navigation & our placing on the leader board.  Having been at the bottom of the first event, we went onto winning this event, steering us to a good place and hopefully in with a chance of winning the winter series. 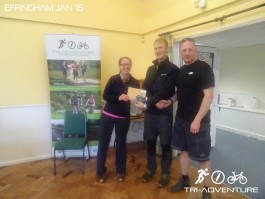 The winter series has been a cold & wet one so far, however the final event was on a beautifully mild & sunny February morning taking place in Shere.

With our bikes ready in the transition area, it was time to study the maps, work out which hills/checkpoints were doable, plot the best route & drink tea.  With the run first, it was decided to spend the extra time on those checkpoints & only go for a couple on the bike.

As 10am approached, Adam (tri-adventure race director) gave us the event briefing & we all walked up the muddy bridleway to the start flags.  With the clackson sounding it was the off.  Being at the bottom of the surrey hills meant the only way was up and up and up!  The bridleway was chalky, wet & slippery, with a steep drop on one side.

Having found & dibbed in at our first checkpoint it was another steep climb up to our next one.  However, this didn’t go according plan, taking one wrong track turned out to be a costly error both in terms of time & checkpoints aimed for.  With time flying by, the course planned was changed & it was back down the hills to look for a different checkpoint before heading into transition.  With the new checkpoint being through the village of Shere, we set off greeting people out & about as we went.  With a turning off the beaten track & over the ford, our last checkpoint of the run leg for us proved to be elusive and with time ticking by we had to drop this one and return to transition, today was not going to be our day. 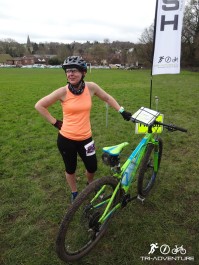 Back through the village, saying hello the same people & back up to transition to peel off layers (the weather was too mild for long sleeves), grab a drink, gulp down a gel, grab bikes & it was time to hit the road before heading back to the mud & going back up more hills for the checkpoints of the bike leg.  This leg of the event proved to be more successful & the plotted checkpoints were gathered & with the wind at times pushing us backwards we made our way back to the village & into the transition area where we dibbed in for the final time of the event & the winter series. 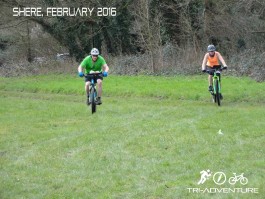 With all the trail & sprint participants back, the results were in & Adam took over the mic to announce today’s event winners & the overall series winners.

Missing out that checkpoint on the bridge & getting the navigation wrong proved to be our downfall & we missed out on being the sprint pairs winners by just 1 point!

Still, this has put fire in our bellies & fingers crossed we can come back stronger & tackle the autumn series with pure grit & determination.

Thank you to Adam & his team at Tri-Adventure for allowing me to use his photos.