How to read a compass – Part 1

A compass is an amazing piece of kit… when you know how to use it! Whatever you’re doing outdoors hiking up a mountain or navigating on an adventure race, you need to make sure that you have a compass for hiking. Reading a compass properly not only keeps you on the right track but could, ultimately, save your life.

At Tri Adventure, we know how important navigating and compass reading is to plotting routes and finding your way round the track. So, to make things a little easier for you, we’ve created a three-part series to compass reading, so you know your Magnetic North from Grid North, and can take your adventure racing to the next level. 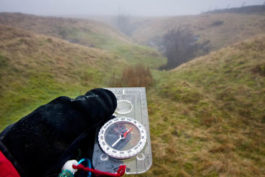 The compass needle always points to Magnetic North. What is Magnetic North? Why are there three Norths, and what are the differences? It can get a little confusing, so let’s keep it simple.

The first is TRUE NORTH – this is a fixed point where the geographical North Pole is located, and where the Earth’s Longitude Lines meet. Its reference isn’t used when navigating with a map but it’s still useful to know.

The second one is GRID NORTH. This is not a fixed point; it’s essentially the top of your map towards which the North-South grid lines run in parallel to one another. Where each line ends at the top of the map is where GRID NORTH is. GRID NORTH was created by laying a rectangular grid over the whole of the UK. This is where Grid Referencing comes from.

The third and final north is MAGNETIC NORTH. This is a moving point, influenced by the movement of the Earth’s liquid magma (the stuff which comes out of volcanoes). The compass needle points to MAGNETIC NORTH, and it is governed by the magnetic field of the earth.

Pick up any navigation map and the key will indicate the variation between Magnetic North and Grid North in the area you want to travel.

If you use the needle of a compass in conjunction with the Grid North of a map to identify your intended direction of travel, you can’t go far wrong.