This year I chose to enter the 100 miler, NDW100 again. This time to better my previous time of 23h04m. The forecast was for a hot weekend and I would be tackling this event with 3 other members who were new to this distance from my running club, Clapham Chasers.I felt well rehursed for this event having completed it only a year earlier having doubled it up with another hundred, Lakeland 100 the weekend before. I was psyched and looking forward to taking this challenge on again.  There were going to be a number of Clapham Chasers out on the course giving support.  I had opted to not use any pacers in the later stages, taking this challenge on myself. 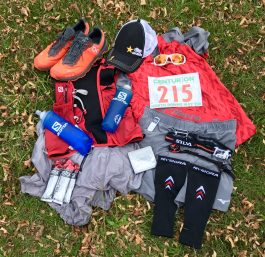 It was an extremely hot day and I knew hydration would be key to any success. I took advantage of a fairly quick pace early on in cooler conditions and flatter ground.  I was hoping to complete the route in under 21 hours this time.  I was pleased with my start and was eating and drinking just fine to keep my hydration levels up. As soon as I hit the hills of St Martha’s Mount and Box Hill i was jumping between 10th and 14th position, and I took some gels to help with the ascents.  These gels had caffeine in and I know from previous experience that there was a chance these would not sit well with my stomach. It is a shame to say that this was the case again as my body stopped absorbing any fluids I was putting in.  The fluids built up in my stomach and swashed around like a hot water bottle before making me sick.  This sickness meant I was also not taking in any food and as a result after 34 miles of running I came to a halt! I literally hit empty and my mouth was dry from dehydration.  It then took me a huge effort for me to make it to 42 miles where the next aid station was.  When I arrived there, I told them what had happened, I had no energy to stand and I said I would be spending some time there to try and eat something and absorb some fluids.  I was there for about 1h20m and still didn’t feel any better despite lying down.  Still I got the show on the road and made it to half way very slowly where I had made the easiest decision to not continue.

It just wasn’t my day.

But is was a great day for the 3 other Chasers who were well supported. Matt, a great Marathon Runner and 100km Runner won the event after a perfectly executed race. Alex managed to get under the 24 hours with a time of 22h52m and Frankie, despite falling over at half way managed to duck under the 25 hour mark with a 24h59m time.  What was special was that having dropped out at half way, I was able to hitch a lift to join the support team of these runners.

That is all for now, I am sure there will be another ultra at some point for me, but I am going to take a break for now.  I was really pleased with my effort and love this event. I was mostly chuffed to see 3 new Chasers join the Club Spreadsheet I keep of 100m+ Ultras. There are now 21 members of the club.