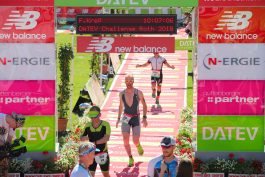 These events take a lot of preparation and these days you have to enter the triathlon events like this a year in advance. I had full intentions to train and tackle this event with an aim to better my time from completing the event 5 years before. The training didn’t come together in the run up having only been to Shepperton Lake once, ridden a single road ride to Brighton and back in April’s freezing ‘Beast from the East’ conditions and then cycling to Paris with the Clapham Chasers the week before Roth. The weather was so nice on the trip to Paris, I decided to ride back to London again afterwards. My running had stopped after the hot London Marathon where I ran 3h18m in non idyllic conditions.

Having said all that, I was psyched to head back out to Germany and give Roth my all and relied on the fact that I had done the event a couple of times before. I was to be joined by another 2 Chasers, Cat and Henry who ere also taking part.

The journey out there was great, Germany had just been knocked out  of the World Cup at the group stages which made for some interesting travelling. I touched base with an old friend over there who I had not see since a bothy adventure 8 years before. I stayed with them and we watched the England match. The following day I headed over to Roth in my hire car and set up camp in the field next to the Swim Start.

I had big ambitions when I Registered for Roth a year before and unfortunately, that put me in the second wave start behind the Pros! I was not looking forward to this since swimming is my weakest discipline of the three and I was well out of practice. Waves of 200 were set off in 5 minute intervals. The morning was stunning and made for super racing conditions, not too hot. The swim went ok, I was caught by people in the 3 waves behind me! The swim took me 1h14m. I was pleased to get it over an start on the bike.  My transition through and on to the bike was speedy in little over 2 minutes. 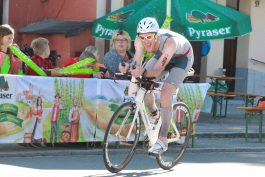 I love riding my bike and the first lap of 2 went well, I wasn’t overtaking many as I was an earlier starter compared to last time. I found it tough going on the second lap where the riding felt more of a struggle and I seemed to be going backwards, even on the downhill! I thought it was due to a loss of power in my legs, maybe London to Paris and back was taking its toll. There was a bit of a squeak developing which I think too much of and my lower back was starting to really hurt. It wasn’t until after the event and I collected my bike form transition that I realised my wheel had dislodged (maybe as a result of the powering up hill) and had been rubbing the tyre against my rear seat stay causing a large area of carbon to be warn away. 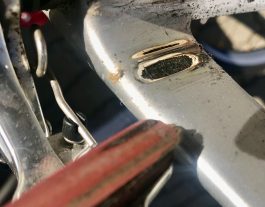 Anyway, back to the race and the relief of getting off of the bike after 5h26m of riding, 25m slower than I had previously gone. With my aching back I was pleased to be vertical and on the run. It still felt quite cool as the first part of the run was in the shade.  I started off comfortable and pleasantly surprised at the initial Km times. I knew Henry was starting about half an hour behind me and with his fast biking ability and my slower than usual bike, i knew it would not be long before I saw him on the hairpin run course.  I saw Henry at the 3 opportunities looking strong going on the opposite direction. I was calculating that I was opening up a wider gap between us but also knew that it would be close having taken in to account our different start times.  I enjoyed the run and the amazing stadium finish that Challenge put on to finish the marathon in 3h37m and overall time of 10h22m. It was then a waiting game to see Henry come through.  I managed a shower and a massage in the half hour wait before Henry finished. Henry slowed up a bit on the run but was able to hold on to a 10h19m finish, just 3 minutes quicker than mine on his first triathlon of this length.

I felt great to have finished and wasn’t too trashed. This time I was able to and drink copious glasses of Erdinger being given to the finishers and then enjoy the final finishers coming through in the dark to complete there race. This made for an amazing atmosphere for those who had been out for a long long time on the course.

I am not in any great rush to follow up with another Ironman anytime soon. I enjoyed this Challenge and even more so having been there twice before.

Onwards to the next challenge….