Sunday April 24th was the 36th running of the London Marathon. 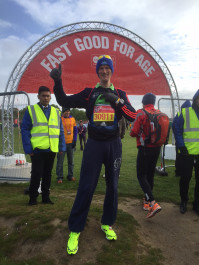 I knew this race was on the cards for about a year since I had a Good For Age (GFA) place from achieving 3h01m07s in Hamburg a couple of years ago.  The preparation for this event had not been solid since my priorities had been with my businesses.  Still I had been on a number of social runs with my running club, Clapham Chasers (Chasers). The first aim was to achieve another GFA time, then to beat 3h01m07s to get a PB, and if all goes well to get under 3 hours for the first time.

Race day and I felt good. I really wasn’t sure how the day would go, but I knew I had to go for the target of running under 3 hours, 6m52s per mile.  This was my 20th Marathon and I had been close to going under 3 hours a couple of times.  I saw a couple of my club mates at the start but chose to run on my own as I focused on starting at a steady pace and not going to fast at the start.

I had my GPS watch on which I started on the line, I also ensured I went over the line on 30s past the start to help keep track on my progress through the course clocks.

The first half went well and just before Tower Bridge I caught a Club Mate Alex and we ran to a great reception over Tower Bridge, through Half way in 1h27m and on to fourteen and a half miles where we would see our Chasers support crew near Westferry.  This is a great spot that offers supporters 3 points of contact on the course.

Things were going well and I felt fine.  The crowds reduce a little through Docklands but I was able to keep a good pace through to the next Chaser contact point at twenty-one miles.  It is great to hear all the support again and to be on the last ‘home straight’.

I had not looked at my watch after half way since the GPS was throwing all my timings out with the poor signal.  I felt fine and knew I just had to hold position and run well.

I knew from my recce of the course I needed to be at 23 miles before 2h38m to be on a 3 hour pace.  Iwent through in 2h 37m on their clock so I knew it was still going well.  Soon after this I was caught by the 3 hour pace group. I didn’t allow this to phase me.

Again the support was amazing all the way to the end.  I spotted Jasmine, an former colleague who was managing the Lucazade Station.  Not far now.  I made it to 800m to go which is where the 26 mile marker is.  the clock said 2h57m.  I knew it was going to be close and required a push to the finish.  I turned into The Mall and heard the last 3 hour pacer cross the line on 2h59m59s.  I knew I had 30 seconds to sprint to the line.  When it cam in to view the clock was reading 3h00m10s.  I had 20s to make it, and it took me 22s, giving me a time of 3h00m02s.  I was not aware of my actual time at this point, but was pleased, I had managed a PB and had enjoyed the run. Also the GFA time will allow me automatic entry again next year.

I saw my former boss at the finish who manages the directing of us finishers.  I have also worked this section before and it is a great place to work with so many happy people.

It wasn’t until I caught up with Liz that I was told that i was only 2 seconds over the 3 hours!  oops, so close, yet so confident that I can run faster next time.

Great event and lots of Chaser Support. Thanks! 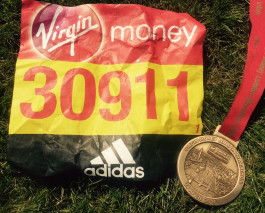 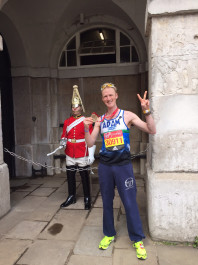 The following week was used to restock with calories.  Starting off with a free burger, or 2, at GBK for my efforts. 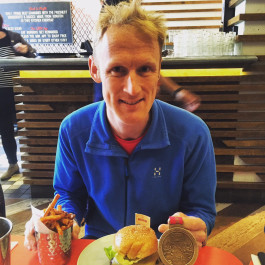 I knew I could have pushed it a little harder on race day.  The whole run went really well.

I was keen to test my legs the following week by entering the Richmond Half which I successfully achieved in 1h24m28s. 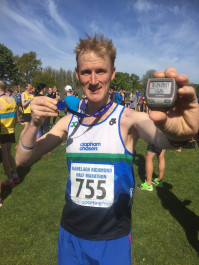