Sunday 22nd April saw the streets of London again packed full of supporters to cheer on the runners taking part in the annual London Marathon. From a participation point of view, this is the best race on the planet for support.

The training had gone well with long runs, together with track and tempo sessions to mix it up.  I had also run the Hampton Court and Brighton Half Marathons in the build up where I clocked a 1h21m in both.

As the big day approached, the forecast was suggesting that the day would be a hot one.  It had been hot all week, prompting London Marathon organisers to contact all their runners to come prepared. The weather was polar opposite to what we had done all our training in, for example, the Beast from the East which brought in freezing conditions. 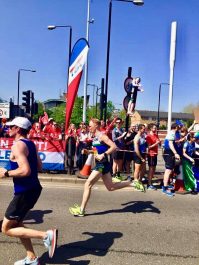 The advice from London Marathon was to adapt our targets accordingly, due to the heat. Now, I felt I was close to 2h50m shape from all my training, yet I still had not broken 3 hours for a marathon. After a great night’s sleep, I had my porridge and set off towards the start. I set off conservatively, knowing it was going to get hot and uncomfortable. The first 5 km are down hill and I was able to run along with some other runners from my club. The pace felt OK, but I could feel a growing discomfort as I continued to run.

The day turned out to be London Marathon’s hottest day on record, with temperatures hitting 23.5 degrees! I was not adverse to running in the heat, having taken on the Marathon Des Sables in 2015, and I would never complain about a bit of English sunshine, but to race hard in the heat chasing personal bests is another thing.

I hit half way in 1h29m with my target in mind to achieve the sub 3hr, but it didn’t feel as comfortable as I would have liked. I was taking sips of water at each water station to maintain enough hydration from all the sweat.  I carried salt sticks to help top up my levels en route.

One amazing part of being a member of Clapham Chasers is that there are 50/60 Chasers who head down to a Cheer spot shortly after 14 miles in Westferry. This offered a great lift of energy and a brief moment to forget about the heat we were all suffering from. I chose to ditch my hat here as the sweat mixing with my P20 sun protection was going into my eyes and making them sting. 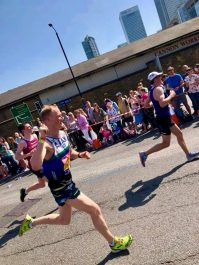 Acknowledging the support of fellow Clapham Chasers
out in their masses to support the event.

I kept a good pace going round the Isle of Dogs where in the past the support thins out. Not this year. I think those who were watching were in such awe of runners tackling the conditions that they kept the electrifying support up. Upon exiting Docklands, just before the 17 mile marker is where I felt an acute blister develop on the instep of my left foot.  Every step I took, I could feel it force itself bigger and there was nothing that I could do.  This knocked my morale as my pace by this point was already dropping off the 3 hour target I had set myself.  London Marathon the week before had announced that the Good For Age time for guys below 40 was shifting from 3h05m to 3h00m. This shift linked my qualifying standard to my PB. Once I had dropped off the pace, my thoughts soon picked up on the lack of a time to chase and, instead, I eased off the pace and made the most of the immense support and atmosphere along the remainder of the route to the finish. I didn’t feel defeated and there was no sudden wall I hit! At an easier pace, I remained focused on not stopping running the rest of the way.

There were runners in all kinds of states who had succumbed to the conditions and wobbling about. I was no longer looking at my watch and kept myself moving to the finish. 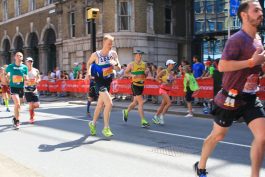 Mile 23 and the final stretch towards the finish.

It was a relief to see the finish line and enjoy the last bit of the Marathon down the Mall and then to cross the line and receive my medal in a time of 3h18m38s.  It was nice to see a couple of familiar faces who were staff working at the finish, ushering us through to collect our T-Shirts.  I wasn’t my usual chirpy self, having left everything out on the course and not really recovering.  Afterwards, I went straight to find a shady tree in St James’s Park for a well earned rest and an hour’s sleep. 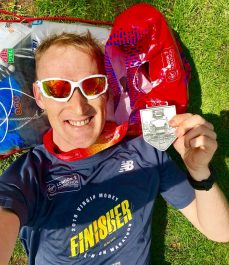 Having a rest with my medal in St James’s Park 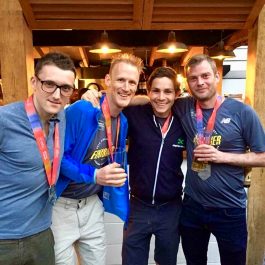 I am really pleased with my efforts from the day, having given it my best shot.  The conditions were not ideal for me to run a fast time and, as soon as I knew that my PB attempt was over, I focused on enjoying the rest of the race.  I will save the big sub 3 effort for another day. I am sure I will be back but I will now need a plan B since I no longer have a Good For Age qualifying time to guarantee me an entry in to next year’s race.